First Race Event of the Season

I have a confession to make. I was more than a little nervous, yes, even afraid of this weekend. Yes, it was the first race weekend of 2014 and every first brings the normal dusting of the rust etc. However, this weekend would include the maiden voyage of our new fire breathing monster, the ZX10R. Bob Brown has long stated that “God hates a coward.” Well, with the Bible saying “do not fear” in one form or another 365 times, he is likely to be right though I don’t know if “hate” would be the right word. But, it does get the point across. Anyway, I hope that I didn’t disappoint our Lord in the weeks and days prior to this weekend. If I did, I surely hope I made up for it with the way we handled the weekend. 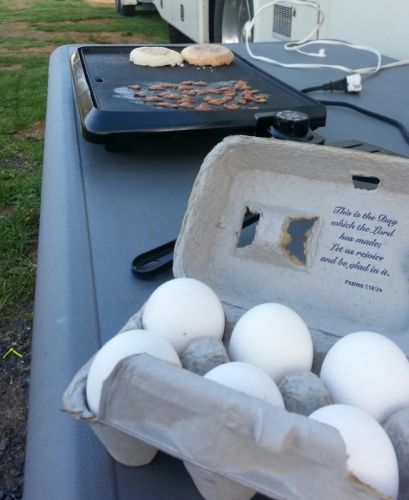 Sometimes, an egg carton can get you on track in the morning… psalm 118:24 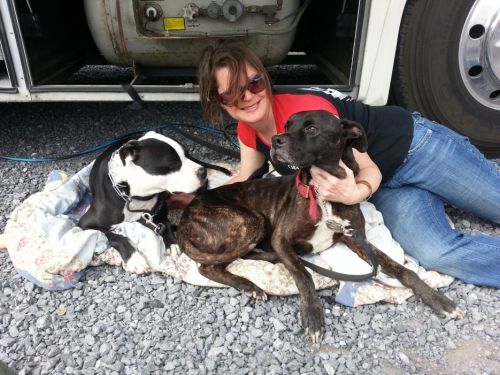 Lovely Denise snuggling with the dogs.

The weekend started off with a full practice day on Friday. This day was sorely needed as I was eager to get the ZX on a track that I knew and trusted. NJMP doesn’t even come close to filling that bill. So, after getting back in the groove with Summit in the morning, We tossed on a new set of Bridgestones and hit the track in the afternoon with good rubber. Practice went well and we were happy with the progress. With no lap timer on the new bike, we had no idea where we were time wise but I could tell improvements were made and more were to come.

Saturday came and found Denise and Cecilia heading over to the grill to cook breakfast for MARRC. Luke and I set up the canopy and prepped the bikes for tech. After registration, tech was a breeze. WERA tech is stringent but once you get used to prepping for it, it’s actually easier and faster than CCS. With tech complete, we set the bikes up with warmers and got ready for practice.

This weekend, we set three goals for the team. 1) Don’t crash the new ZX. 2) Don’t finish last. 3) Get the ZX monster into the 1:18s. Maybe this was a tall order on all three fronts but it is what it is and we moved forward.

The two practice sessions in the AM were both run on the ZX and the SV. This was the first time I was on the SV since last year. It surely felt different! ZX Lap times were finally recorded and they had moved into the 1:21 range. This was pretty poor since this class will require lap times in the 1:15-1:16 range to podium or win. But, we had to start somewhere. With no races Saturday, Luke and I both volunteered to work corners for the afternoon. Of course, during the second race, it started raining. It kept raining all afternoon. I was so annoyed that I wasn’t out there getting it done in the rain. But, it is what it is. 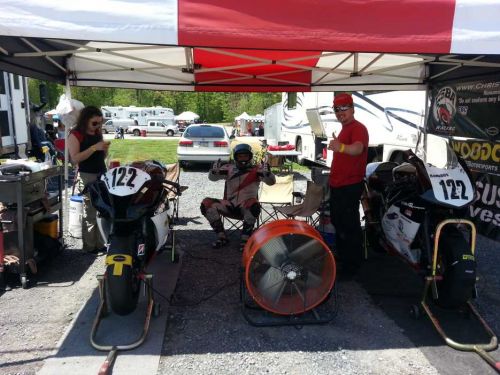 Saturday evening, we were all exhausted. Still we made some rounds and spoke with some people. With the bikes snuggled in, we spent a good many hours chatting with our good friend Katie Overton who had stopped by for a visit.

Sunday morning arrived and we were ready to go. Still a bit tired but the anticipation of dropping the hammer on the ZX for the first time, somehow gave me energy. Since this was game day, practice was a bit more serious and our lap times dropped into the 1:20s. Still two seconds away from our goal, it was encouraging to see things moving in the right direction.

Lunchtime hit and we had a lot to do. Denise and Cecilia were in full prep mode to get the café ready for the breaking corner workers that were surely hungry. Luke and I prepped the bikes by recharging batteries and topping off fuel. Warmers were on but not plugged in and first call for the rider’s meeting was hanging in the air. I rode off to get grids for my races and hit the rider’s meeting on the way back. Then, off to chapel with Mark Merical sharing a message. The service was sparsely attended but, so was the event as a whole. 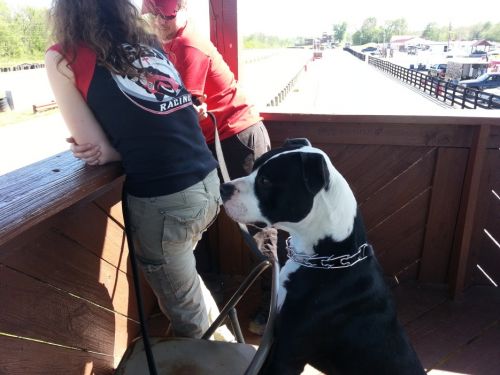 I was in the first race so things would move fast. My nerves were on edge as I proceeded through the calls and suited up. The bike fired and off I went to run the warm-up lap. I rolled up to row 2 and waited. I had done one quick practice start on the hot pit a day ago, but this would be my first real start on a 1000. As the flag moved, the stomach settled as I released the clutch at around 8000 rpm. As I fed the beast both clutch and throttle, I short shifted into second to kill some of the torque multiplication. As second gear engaged, the front lofted to a ridiculous angle! I had to cut the throttle to bring it back down and as I did, a half dozen bikes or so sped by me on the way to T1. Side by side we growled our way through the first turn. Back on the throttle to exit T1, there were at 9 bikes in front of me. Getting a good drive, I set up two riders between T2 and T3. As a result, I moved up two places on the exit of T3. I took another in T5 and was hot on the tail of more by the time we finished the 1st lap. As we fought on, I managed to pass a few more and finished 5th. OK, well, the goal was not to finish last and not to crash. Those two were complete so far.

With a few races to wait, we were ready for the next one. This time, I started without the wheelie but my launch was horrible and I was still swamped into T1.This time, I fought back to a 4th place finish and when all was done and lap times recorded, we had recorded a 1:18.8. The third goal was achieved!

The last race for the day was on the SV650 in Lightweight Twins Superbike. I had a decent start, pulled the holeshot and lead for most of the race. But as I was on an old set of tires from last year, my grip was down and I later found out I was running around 3 seconds slower than my usual lap times! Sean Mueller was gaining on me. He passed me on the second to last lap but I just didn’t have the tires to stick with him. So, finishing second wasn’t so bad.

Valentino evaluating my line through T10….

The weekend was a success overall. We had achieved all of our goals and finished with respectable positions in all of our events. We were able to spend some quality time with friends and make some new ones as well.

Please contact us if you would like us to do something with or for your organization. The schedule fills up quickly so get on the phone!

We have plenty of on and off track work to do for Him!