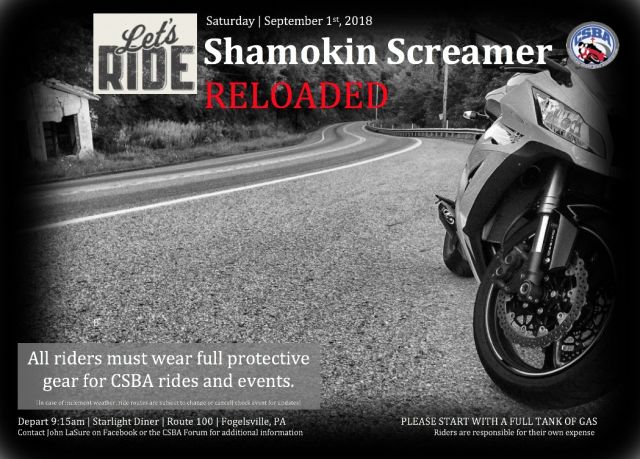 On Saturday, September 1st, the Eastern Pennsylvania Chapter of the Christian Sport Bike Association will be having it's scheduled September Monthly Ride - RELOADED - The "Shamokin Screamer".

We will be meeting at the Starlite Diner in Fogelsville for breakfast around 8am and the ride plans to leave around 9:15am, so please be ready. Late comers might get left, so don't be late!

For those that know us - many enjoy this one as it's one of our most popular rides. The “Shamokin Screamer" encompasses the very challenging and technical section of the famous RT 125 path that most have either heard about or are familiar with - unfortunately, the recon team put in the work and it's confirmed that part of this road is under serious repair. We're planning to still ride it on the route, but we won't be able to run it at the pace we normally do. The Shamokin region is under repair with several detours, so we'll just work around it - there are plenty of good roads to enjoy - so fun will be had by all. Check out some of the video's on the discussion panel for roads we're planning to hit.

The crew will be enjoying a hearty lunch at Masser's Restaurant in Paxinos at RT 61 & 487. This ride concludes at a Hess on RT 125 near “Sweet Arrow Lane” in Pinegrove, PA.for those wanting to know the end point. Come out and enjoy the roads with us. Remember all our riders are required to wear their protective gear and select their riding group (see below for details).

All bikes and beliefs are welcome, please let us know if you or any friends are coming (send them invites). Please ensure that you and any friends both read and comply with our ride policy, www.pacsba.org/join/ride-policy. Also please come to the diner with a FULL TANK OF GAS. We will not be making additional stops during the rides - just the scheduled stops approximately every 80-100 miles. There are two gas stations on either side of route 100 near the diner, so please fuel up before the ride. Thanks!

Lastly, please if you decide to join us for the day, we ask that you select a pace and group in which you desire to ride (below on pinned post) to start the day out with - you can always change your group later - it's just to help us assign you a rider leader and group to get the day started off right. Thanks again!

The event will be subject to weather (like all of our rides this year), so make sure you check back prior to ride day.
We hope you can make it… Let’s Ride! 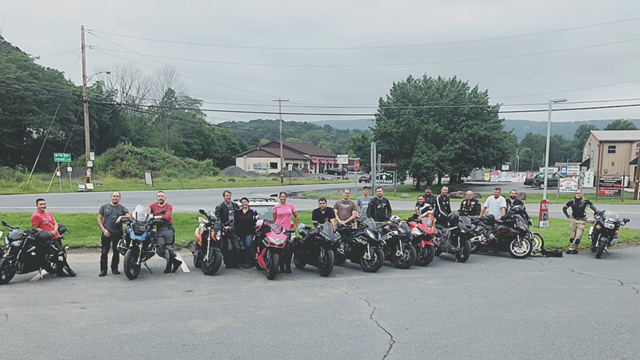 Group photo of all the riders that attended the ride

With the arrival of nearly every weekend throughout the Spring and Summer of 2018, there has also been a forecast for rain. And, for the past two summers, nearly every CSBA scheduled ride has included a forecast for rain. So, as the Labor Day weekend approached, we in the Eastern PA Chapter anxiously monitored all the weather forecasters and their predictions for rain, in order to attempt to retry the Shamokin Screamer ride (already postponed because of rain).

So, naturally, the morning would be wet, but we determined that it was at least worth meeting up for breakfast and assessing the conditions before giving up on the day. Those who traveled from the South were treated to a few soaking rain showers on their way to the Star Lite Diner, while those who live in the Allentown area endured a couple hours of soaking rain before the scheduled meet up. But, all the radar images showed that no significant rainfall had come through the area of the route, so we believed it was worth venturing out.

Eighteen riders showed up and, due to the combined issues of the weather and the lack of leaders familiar with the route, we all followed along as one “Relaxed Pace” group. The roads were wet, with occasional mist and light showers in the air, so caution was paramount. Thankfully, the temperature was agreeable; not too hot and humid, nor too cold and damp. Along the way, we took a brief pause to allow for a certain pink GSXR-600 to catch up to the group. Traveling at this reduced pace, one could have taken the time to appreciate the side benefit of rain nearly every day for an entire summer: some very lush and green hills and valleys, to go with the swollen creeks and rivers.
As we approached the windmills north of Mahanoy City, they could not be seen through the heavy fog that covered the ridgeline. But, as soon as we descended into the next valley, the roads were dry and the clouds were much lighter, which allowed for nearly perfect riding conditions for the second half of the morning. Unfortunately, there was a bridge under construction on Rt. 339 that forced a rather unappealing detour through some otherwise nice scenery.

As we stopped for lunch at Masser’s Restaurant in Paxinos, we were pleasantly surprised by the arrival of our fearless leader, John LaSure. This allowed for the creation of a second, faster paced, group as we anticipated an afternoon of mostly dry roads. The majority of Rt. 125 was dry, but the northern half of it had been recently tarred and chipped, so it was a sketchy surface, wet or dry. The southern half was marred by a bridge under construction and another uninspiring detour. And, to complete the trifecta, the much-beloved Gold Mine Rd was still wet as we arrived on it in the mid-afternoon. Fortunately, we all arrived at the final rallying point without incident. We regrouped for return trips home, posed for a final group shot, and bid our farewells.

Unfortunately, the story doesn’t end there… As a group of 8 riders heading to points south and east travelled their backroad route, one rider lost the visor on his helmet. After briefly stopping to look for it, he had to abandon hope. A little while later, another rider looped his bike into the edge of a farm field. Thankfully, he escaped with minor injuries, reinforcing the lesson: ALWAYS WEAR DECENT RIDING GEAR. But the bike did not fare so well. Thanks to the help of some extraordinarily gracious neighbors and passersby, enough tools were brought out to make it possible to limp the bike back home in the dwindling daylight. We, again, regrouped and said our “goodbyes” outside of Fleetwood, and some went on to continue the night with the We Meet At Sheetz crowd in Bethlehem.

A sincere “Thank you!” to all who attended the ride. We really struggle with what to do in weather conditions like this, so we really appreciate when we have enough in attendance to make it worth everyone’s time. And, and extra-special thank you to a new guest from the Hazelton chapter of the CMA: John Brady, whose veteran presence was thoroughly appreciated.